Yesterday, a handful of friends and I came face to face with a dozen donuts, two pizzas and a two-story house that was no longer mine.

Somewhere in between the initial assessment and Sarah unintentionally rummaging around in the ashes of my dead cat, we came to terms with my mother’s incessant hoarding. From decade-old magazines, high school uniform order forms, a bootleg copy of Stuart Little 2 and the Furby I’d hoped was burned at the stake, my mom kept it all. In boxes that were in boxes in other boxes.

By the five-hour mark, a friend was knee-deep in the horrendous hoarding that became my parents’ room (literally), a mess he only conquered by standing atop the five-foot wreckage like a king.

I use the word conquer very loosely.

Eight hours in, I needed air. Maybe it was the dust but let’s call it a moment of clarity. Not only was I (newly) rich in ugly sweaters and multi-colored windbreakers, but I was (always) rich in friends. The friends that offer shelter when life comes crashing in like the movie Twister. The friends that pocket those fifth grade school pictures because your bangs are crooked, you’re posed with a tree and there’s a spot for it on their fridge. The friends that narrate every single diary entry they find, up to and including the digital Dear Diary (sup 90’s) and your first “story-book” that’s really just a composition notebook full of hand-drawn volcanos and things that could (maybe) pass for people. They alert the masses of every new picture found of you in a hot pink snap-back and a shirt that says “DON’T FEED THE MODELS.”

They ask before throwing anything away, just in case that “2 Cute 2 Fall 4 Boys” book has any sentimental value.

They make this whole “being a 22-year-old with no parents and no home of her own” thing a little less terrifying and a lot less painful – and they do it while wearing your mother’s hot pink windbreaker.

Thirty-something garbage bags and three coffee runs later, we said goodbye, jamming every Staples-bought box of fine China and cringeworthy pictures into our parent’s old cars. Here’s (just some of) what we encountered:

My hypothesis is that leaves change color by how much it eats. I think it’s becaase of chorphyll. I picked this project because I wanted to know more about leaves. 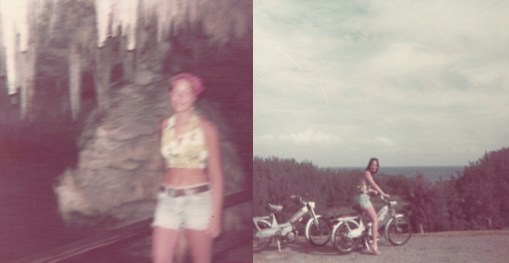 At eight years old, a journalist was born, singling out stars like J.C. for knowing how to drive. Why I reserved my personal info for just Joey, I’ve yet to figure out.

At the end of a long, hard, dust-ridden day, mom left a light at the end of an embarrassing tunnel. While we cursed her habitual hoarding which, by the way, she hid remarkably well, we tugged at heartstrings that hadn’t been touched since those photos were taken; since burying Coronas in the sand at sixteen and receiving communion in an all-white tux. We laughed, we cried and we cried laughing.

Just one more day to thank her for.

3 Comments on “Live and let hoard”